Dimitri Payet was sent off at the tail end of Marseille’s defeat to PSG tonight for a horror challenge on Marco Verratti.

The two French giants met tonight in ‘Le Classique’ with Mauricio Pochettino’s men winning 2-0 away from home. The Marseille players ought to be glad no fans were allowed in the stadium, because emotions tend to run high during this fixture and things could have turned ugly after that performance.

There was a fair amount of ugly on the field of play, though, as there oftentimes is in this fixture – just ask Neymar’s ankle to testify. 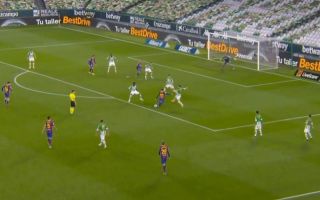 Dimitri Payet was the man in cuffs tonight, with the former West Ham no. 10 having been sent off for karate-kicking PSG’s Marco Verratti.

It was an absolute shocker from Payet, and the kind of tackle that you’re simply not going to get away with in the modern game, with VAR in force.

See the incident below. It’s no wonder Verratti signalled to be subbed off…

Collymore on what Liverpool need to do to retain title