The replays of Harry Kane’s fine finish to make it 2-0 to Tottenham Hotspur is a complete nightmare for Arsenal fans, with marquee signing Thomas Partey injured and unable to stop the counter-attack.

Serge Aurier won the ball in Spurs’ box and sparked a counter-attacking opportunity with a brilliant pass into Giovani Lo Celso, who drove forward before playing it to Heung-Min Son.

Jose Mourinho’s side had the numbers advantage on the break, leaving Son free to slip in Kane to set up the side’s second, but it all could’ve been stopped if Partey wasn’t injured.

Partey walked over to the sideline after a slide tackle on Steven Bergwijn moments before, the ace immediately walked off the pitch with a worrying injury concern.

Mikel Arteta actually had to push the midfielder back onto the pitch whilst Lo Celso was driving forward, but the Ghanaian pulled after just a couple of strides.

If Partey wasn’t sidelined due to the injury, he was in the perfect position to stop Son in his tracks.

It’s that combination again! An emphatic finish from Harry Kane doubles Tottenham’s lead on the stroke of half-time. 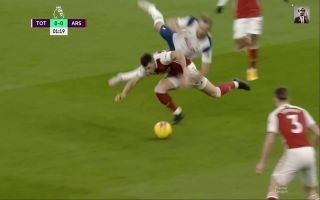 It’s really a double whammy for the Gunners, Partey appears to have aggravated the injury by returning to soon, whilst the side’s deficit against their heated rivals was extended.

Arsenal set to miss out on Phillipe Coutinho