Manchester United are reportedly likely to trim their squad as they close in on the transfer of Ajax midfielder Donny van de Beek.

The Red Devils are also said to be planning further additions to their squad this summer, so will look to let go of the likes of Jesse Lingard and Andreas Pereira in the near future, according to the Times.

United could do with strengthening after a disappointing season in 2019/20, in which they failed to win silverware and only narrowly made it into the top four.

The Times claim Van de Beek has agreed terms on a move to Old Trafford, and that Lingard and Pereira look to be likely names who’ll make way as Ole Gunnar Solskjaer also eyes a new centre-back, right winger, and striker. 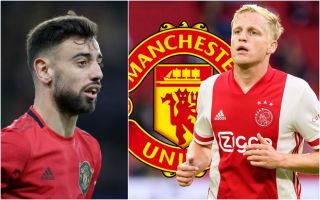 Man Utd fans will hope Solskjaer can get this crucial business done, with Lingard and Pereira certainly not looking like being valuable members of the team any time soon.

Their departures could be key to raising funds and clearing the wage bill to help United focus on bringing in players with more quality and better attitude.

Liverpool set to sign Thiago over Arsenal to replace key…

Aubameyang holding out for a contract from La Liga giants