Manchester United have reportedly made a €50million bid as they pursue the transfer of Real Madrid centre-back Raphael Varane.

The France international is being strongly linked with Man Utd by Marca, who claim a €50m offer has been made and that the Red Devils look to be in the strongest position to win the race for his signature at the moment.

It will be interesting to see how this develops, but United undoubtedly look in need of a signing like Varane for next season.

The 28-year-old has shone in a trophy-laden career at the Bernabeu, winning the Champions League a remarkable four times, as well as other major honours such as three La Liga titles and the Copa del Rey.

Raphael Varane has been linked with Manchester United 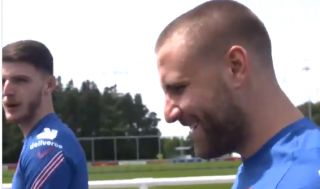 Varane is also a World Cup winner with France, and it’s his proven ability to deliver major trophies that could make him a very tempting signing for United.

It’s been a difficult few years since Sir Alex Ferguson’s retirement in 2013, and a signing like Varane could be important to help turn this team into winners once again.

If they can get Varane for just €50m, it could be an absolute bargain.

Lukaku nets brace for Inter Milan, both thanks to VAR