Manchester United fear that anti-Glazer protests outside Old Trafford on Sunday could delay or even postpone kick-off against arch-rivals Liverpool, according to ESPN.

The Man United fanbase has been just one of several who have taken up arms against their club’s hierarchy in wake of the European Super League fiasco.

In United’s case, the anger and contempt is amplified by the fact that the bulk of the fans never liked the Glazers in the first place.

Protests against the Americans have been staged long before the words ‘European Super League’ were ever muttered.

Manchester United fans have previously pleaded for the Glazers to sell-up.

However, no protests have ever been as significant, and potentially disruptive, as the ones which are set to take place outside Old Trafford on Sunday afternoon.

As per ESPN, as many as 10,000 Manchester United fans are expected outside of the stadium, which has left the club fearing the worst. 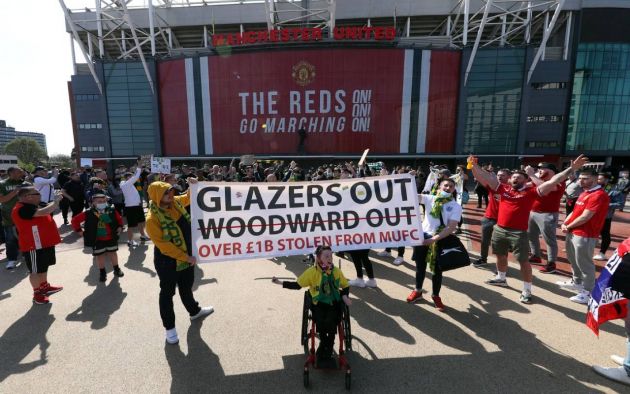 The anti-glazer protests are expected to be significantly larger than last week’s.

The report claims that United fear fans could block team buses, just as Chelsea supporters did ahead of the clash with Brighton, delaying or even postponing the fixture.

Ultimately, whatever the club fear might happen is inconsequential in comparison to the owners sucking the life out of one of football’s great clubs.

Man United fans ought to only be encouraged in rising up against their ownership. Though, we urge them to do so safely, at a distance and while wearing a face covering!

McTominay names the Man United player who he believes is the…

Carragher hits back at super-agent Joorabchian over Willian