Smith Rowe, 20, has enjoyed a recent and sudden rise to the top of English football after cementing his place in Mikel Arteta’s first-team plans.

Tasked with filling the void former number-10 Mesut Ozil has left, it goes without saying, the young attacking midfielder has some pretty big boots to fill.

Despite the pressure resting on his young shoulders, the talented Englishman is more than impressing. 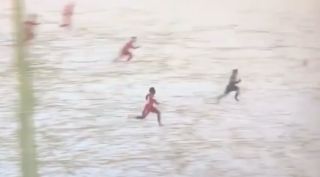 After featuring in 19 matches in all competitions so far this season, the 20-year-old has already directly contributed to 11 goals.

The continued form of Smith Rowe has undoubtedly had a huge hand in his side turning their earlier poor performances around as they look to finish the season strongly.

Whilst in action during Sunday’s six-goal thriller against Marcelo Bielsa’s Leeds United, Smith Rowe once again played an integral role in the Gunners claiming all three-points.

The talented youngster perfectly picked striker Pierre-Emerick Aubameyang out, who went on to bag the Londoner’s fourth goal as well as completing his own hat-trick.

Speaking after the game to Premier League productions (as quoted by Football London), Adams was quick to pile the praise on his old side’s new-found hero.

“Smith Rowe has picked Aubameyang out for that goal,” Adams said. “The kid’s got talent, he’s got feet like Robert Pires.

“Pires could run faster with the ball than I could without the ball. Smith Rowe has got real talent.

“He plays everything with one touch. He’s intelligent and seems to know where the ball is going before he even receives it.

“Smith Rowe and Saka were instrumental in all the goals today. They were both exceptional. Well done to the captain, he got himself a hat-trick but it actually came down to the kids today with Saka and Emile.”

Aubameyang holding out for a contract from La Liga giants