Christian Benteke has scored a late winner for Crystal Palace at Brighton. Graham Potter will be at a loss to explain this.

While there’s only one statistic that really matters in football, have a look at the figures (via the BBC) from tonight’s clash between Brighton and Crystal Palace and tell us who you thought won the game.

Remarkably, it was team number two, Crystal Palace, who had just two touches in the Brighton penalty area in tonight’s game, and somehow, someway, managed to score with both of them.

Palace, who opened the scoring before being pegged back, were against the ropes for the entirety of the second-half. However, with what was virtually their only attack of that period, in the 95th minute, Christian Benteke fired home with a sublime volley to ensure all three points would be going home with the visitors. 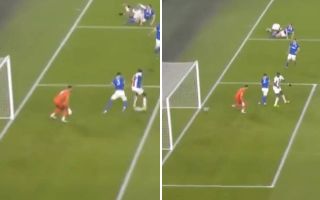 It defies belief, and Graham Potter will be scratching his head for days trying to figure out how on Earth his side have thrown this one way. But, while it’s devastation for Brighton, it’s pandemonium for Palace, who are ten points clear of the relegation zone thanks to this goal from Christian Benteke…

Christian Benteke smashes home to win it for Crystal Palace after Brighton ????????? at the Amex

Chelsea’s Kante would be perfect for Man United’s midfield

Voller tells Chelsea to splash out £90m if they want Havertz